Football Player spends over $19,000 on needy children for Christmas

Football players are stereotyped as big, mean, and scary. We see them every week tackling other players to the ground. But sometimes the players who seem the biggest and scariest, are the most loveable with the biggest hearts. That’s what Houston Texans WR Andre Johnson just proved.


The Andre Johnson Charitable Foundation is set up for children and teens who have been abused by parents, and are now living with extended family members. Many of these children wouldn’t have much of a Christmas. Well Child Protective Services selected 12 special kids to receive a warm Christmas this year.
Johnson and the 12 kids, ranging from 8-16, met at Toys’R'Us for a huge shopping spree. The kicker? The kids only had 80 seconds to grab everything they wanted and put it in their cart. Many of them not only got things that they wanted, but focused on getting things for their family members as well. 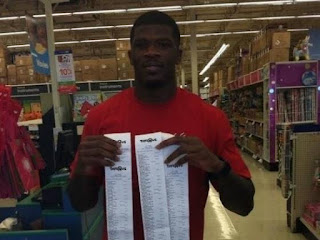 When all the items had been wrung up, the total hit just over $19,000. Talking about the experience, Johnson said “I think it’s probably the best one because you get to see the kids really enjoy it. That’s what this season is about.  It’s something I look forward to. The kids are happy, they get what they want for Christmas, and that’s all that matters.”
Johnson started the foundation because he grew up in a single parent home, and wants to help kids achieve their goals like he did. Johnson’s foundation performs several works throughout the year for children in both Houston and Johnson’s Miami hometown. But he told the team’s website that it’s the Christmas shopping event that he enjoys most.

Check us out on

The credit union is federally insured by the NCUA. Additional insurance of up to $250,000 on your savings accounts is provided by Excess Share Insurance Corporation, a licensed insurance company.